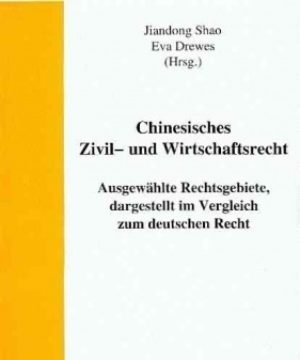 Abstract | The Article examines the extent to which correspondences can be found in German and Chinese law in one of the most important areas of civil law, corporate law. The two most important corporate forms, the limited liability company and the stock corporation, including the special form of the one-man company, are the focus of the study.

The characteristics on the basis of which the company types are compared and a possible influence of German law is to be investigated are, in particular, the procedure of company formation and the organizational constitution of the companies in the two legal systems. The legal foundations for limited liability companies and stock corporations are contained in the Chinese Company Law (GesG). After general provisions (Chapter 1), the first four sections of the law deal with the establishment and organizational structure of the limited liability company (Chapter 2), the establishment and organizational structure of the joint stock company (Chapter 3) and the issue and transfer of shares (Chapter 4). Chapters 5 to 11 deal with regulations (of a more specific nature than in Chapter 1) applicable to both types of company, such as accounting, bankruptcy, dissolution and liquidation, merger and division, and special regulations for branches of foreign corporations.

Since the late 1970s, the PRC has pursued a policy of opening up and reforming, placing increasing emphasis on the structure and systematics of the legal system. Chinese jurists feel called to collect, sort and adopt the latest foreign experiences and legislative and judicial solutions in the field of civil law in order to finally complete a Chinese Civil Code. The upcoming codification of the civil law basically means the completion of the reception, which was initiated at the beginning of the 20th century and is still continuing after a long standstill. Systematic studies on the implementation of the received law in the Chinese legal system have been lacking until now. An attempt in this direction is this volume, whose authors pursue the question whether and to what extent today’s Chinese law is still oriented on models in German law. It is a collection of seminar papers written in the academic year 1999/2000 by staff and students of the German-Chinese Institute of Business Law at Nanjing University on the topic of “Reception of German Law in China”. The individual contributions were each edited jointly by a Chinese and a German seminar participant. It is an attempt to present individual areas of Chinese civil law against the background of German law and to work out deviations and similarities. For the German lawyer, this approach also provides a convenient basis for the study of Chinese civil law.