Foreword to the 205th Update

Wilhelm Henke’s commentary on Article 21 of the German Basic Law (Grundgesetz, GG) in this work was by no means “large” only because of its monographic scope; it was also a large commentary because it fundamentally gauged the doctrine of the constitutional law of political parties and reflected and evaluated the reality of the German party system. These are the reasons why almost 30 years after its publication — the essential parts date back to 1991 and thus to the year before Henke’s death – the commentary is still actively cited. These are “big shoes to fill” for anyone who sets out to comment anew on this constitutional norm — and yet a new commentary was necessary: Party law, the party system, and more generally the democratic order of Germany have been profoundly transformed by a variety of legal and social developments over the past three decades. The jurisprudence of the German Federal Constitutional Court as well as other courts and scholarly work have continued to profoundly impact this area; above all, however, the text of Article 21 of the Basic Law has gained two additional paragraphs.

The new commentary presented with this update takes these developments into account. It takes advantage of the fact that — in contrast to other subjects of regulation — the entire body of constitutional law regulating political parties is laid down in a single norm (without, of course, denying that it is interrelated, and in part also in tension, with other fundamental norms of the German Basic Law, such as the principle of democracy in Article 20 GG or the provision on voting in Article 38 GG): This allows for the development of a (functional) party theory, from which a coherent (constitutional) party law doctrine can be derived. In this way constitutional court decisions can be evaluated on the basis of a doctrinal standard, and factual findings can be understood and categorized with recourse to a set of theoretical instruments.

After comparative (Part I) and historic remarks (Part II), the explanations (Part III) begin with a section on political parties in the concept of political philosophy of the Constitution (A.) and a presentation of the legal functions of political parties that views politics as markets (B.), as well as their effective range within the political order (C.). These theoretical considerations are relined with the systematic position of Article 21 within the German Basic Law (D.) and the constitutional definition of a political party (E.), and cast into the foundation of a constitutional theory of parties. Starting from this theoretical foundation, the individual contents of the constitutional norm are worked through in the order in which they are mentioned in the text of the norm: After explanations of the legal content of the “Establishment Guarantee” in Art. 21 GG (F.) and the provision requiring intra-party democracy (G.), a detailed section is devoted to party finance, which is addressed only very indirectly in the constitutional text (H.). Then, the innovations in dealing with “constitution-phobic” parties, which were initiated by the Federal Constitutional Court in the NPD II case and introduced by the legislature amending the constitution, are systematized (I.). The commentary concludes with explanations of party legislation and thus with the transition to administrative law, which can also be interpreted, evaluated and constitutionally framed on the basis of the doctrine developed vis-a-vis the theoretical background. 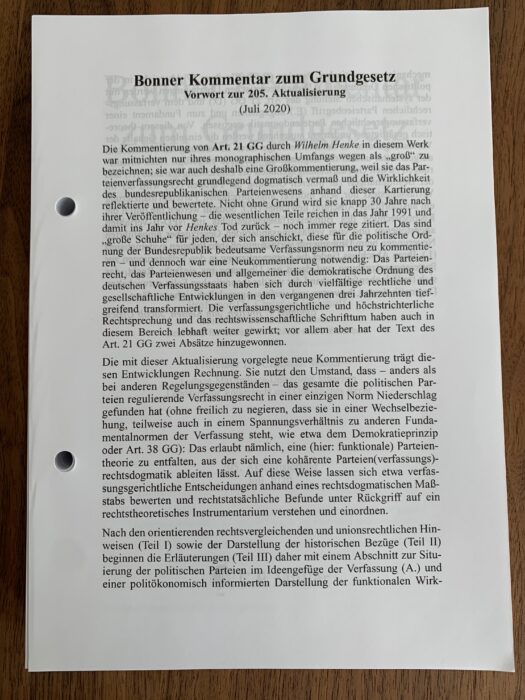 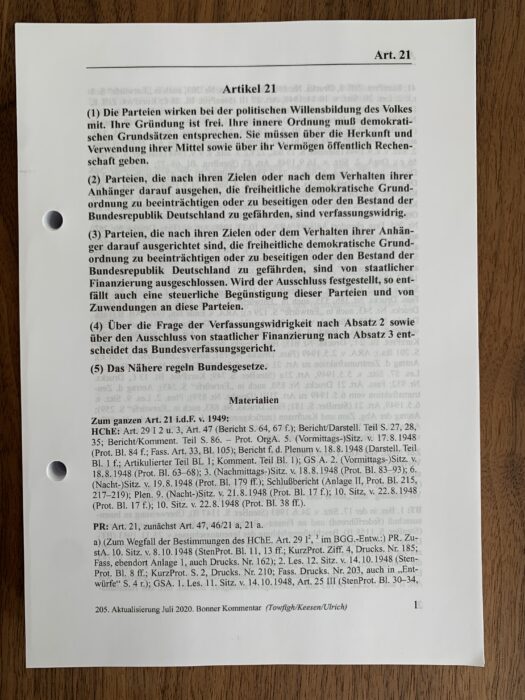